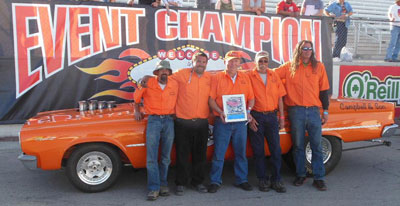 Some people catch the love of cars at a young age.  In the case of Bill Campbell, he was bitten a long time ago and it has since blossomed into a making him responsible for winning the Mopar At the Strip racing event in Las Vegas, Nevada.

When he was just a teenager, Campbell was already collecting spare parts to use in rebuilding cars.  But he only worked with Dodge and Chrysler products.  His first restoration project was a 1964 Dodge Polara 500.  He would then bring his family and friends in on his hobby.  Together, they spruced up a 1965 Dodge Coronet and dubbed it the “Orange Monster” for the race.

They placed first in a 16-car field for the Nostalgic SuperStock/AFX category.  Their winning time was 10.7 seconds, the Monster reaching the finish line at 123 miles per hour.

Bill is quoted by the Chino Valley Review as to why he enjoys Mopar racing.  “For the thrill of it,” Bill said, grinning. “At the start when it pulls the wheels three feet off the ground – the only other thing that smells that good is when you spin the tires and burn rubber. It’s an ‘E-ticket’ ride (former Disneyland designation for big thrill rides).”

Interested in shopping for Mopar parts?  Visit Bayside Chrysler Jeep Dodge online.  We have our new and pre-owned inventory available for viewing.  For visitors in need of auto repair and service, schedule a time to come in with our high-quality service department.  Like us on Facebook and follow us on Twitter for more auto news and for our monthly parts and service specials.