It’s the end of an era at the Mack Avenue Engine Plant in Detroit.  They reached a mile stone with the production of a 4.7 liter V-8 engine.  Normally it wouldn’t be that big of a deal, making another quality engine for Ram trucks and other Chrysler vehicles.  This one, however, happens to be the last one they’ll ever make as production is ceasing. 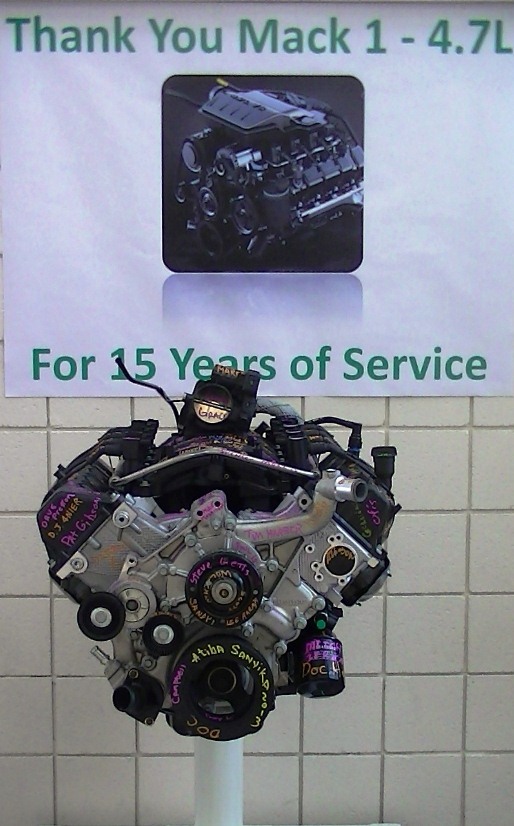 The Mack Avenue Plant has put together more than 3 million powerplants.  They are now planning to move on to the next engine type.  Back in November of last year, Chrysler invested $198 million dollars into the plant, as well as added around 250 new jobs, so that the Mack Planet can start production of the Pentastar V-6 engines.

The final engine made was signed by the employees and will now be displayed in the lobby of the plant.  It’s a bittersweet moment as the workers begin to transition over to the next phase in production.

“Producing more than 3 million engines is a testament to each and every person that has worked at Mack Avenue Engine Plant 1 during the past 15 years,” said UAW Local 51 President Lorenzo Poole.

Plant Manager Bob Hollingsworth continued, “The Mack Avenue team should feel incredibly proud of what we have accomplished.  I applaud all the men and women who have helped build the 4.7 for all these years.  We are going to celebrate because we have a lot of work ahead of us, producing the award-winning Pentastar engine.”

If you are in the Queens area and are looking for top quality service, bring your vehicle into Bayside Chrysler Jeep Dodge.  Contact us and schedule a time for us to take a look at your car.  You can also shop online at the Mopar E-Store for a special treat.  Like us on Facebook and follow us on Twitter for more news and service specials.