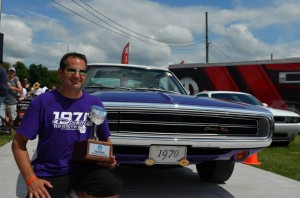 Say what you will about Mopar fans, but one thing that is completely undeniable is their loyalty to the brand.  It’s about showing off that love and loyalty by displaying just how well equipped your ride is.  That’s what Mopar loves to see, their fine work in the hands of fans and so the parts maker put together the “Top Eliminator” program to see the best of the best.

This year’s contest took place at the same place where Chrysler was already making a giant splash by showing off a new concept Ram truck, the Woodward Dream Cruise.

The winner comes from the east coast, a New Jersey resident Bill Mann and his 1970 Dodge Charger.  And what a unique Charger it is with a white-over-Plum exterior.

The other Mopar pick from this year’s contest was Miles Watsko and his 1964 Plymouth Savoy that was held at Midwest Mopars In the Park held in June.

By being a winner, both Mann and Watsko get more than just bragging rights to the rest of the Mopar community.  They also get to be showcased as part of the Woodward Dream Cruise happening this weekend in Detroit.

To read more into the inspiration and work that Mann put into his Dodge Charger, Mopar Muscle Magazine has an extensive breakdown that is a fascinating looking into the work of a gear head on his vehicle.

If you’re interested in sprucing up your current ride, contact our parts and service department at Bayside Chrysler Jeep Dodge and see what we can do to help give your vehicle a unique flavor.